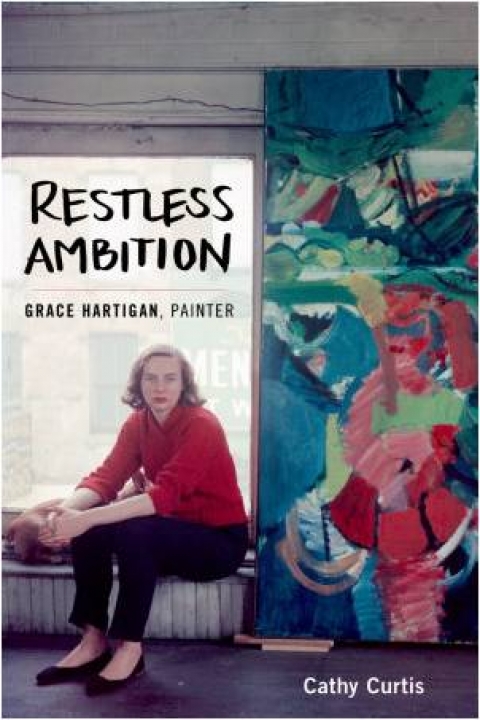 This spirited biography of the career of Abstract Expressionist Grace Hartigan (1922-2008) careens through the life of the only female artist included in many important midcentury exhibitions, such as the Museum of Modern Arts' The New American Painting, which toured Europe in the late 1950's.

Born in New Jersey to a psychologically abusive mother, author Cathy Curtis follows Grace to New York City where Grace forms key relationships with Jackson Pollock, Willem de Kooning, Frank O'Hara, and other artist-patrons of Greenwich Village's fabled Cedar Tavern. Confident and strong willed, but privately full of doubts, Hartigan "always had to be the star of her personal show" which complicated her love life with various male artists - but it also pushed her painting into new territory. From her career in New York City to her marriage and relocation to Baltimore, Curtis takes us through Grace's struggles with money, with alcoholism, and with selling her art.

Although praised for the coloristic brio of her abstract paintings, she began working figuratively, a move that was much criticized but ultimately vindicated when the Museum of Modern Art purchased her painting The Persian Jacket in 1953. By the mid-fifties, she freely combined abstract and representational elements. Grace-who signed her paintings "Hartigan"- was a full-fledged member of the "men's club" that was the 1950s art scene.

Featured in Time, Newsweek, Life, and Look, she was the only woman in MoMA's groundbreaking 12 Americans exhibition in 1956, and the youngest artist-and again, only woman-in The New American Painting, which toured Europe in 1958-1959. Two years later she moved to Baltimore, where she became legendary for her signature tough-love counsel to her art school students. Grace continued to paint throughout her life, seeking-for better or worse-something truer and fiercer than beauty.

"Artists need to be loved," said Grace, "and to have rejection, silence, and indifference was very difficult." Overall, this is an accessible portrait of a gutsy AbEx figure.

ABOUT THE AUTHOR
Cathy Curtis is a former Los Angeles Times staff writer. She holds a master's degree in art history and is vice president of Biographers International Organization.

As one of the many Denver Art Museum volunteer enrichment activities, members of the Volunteer Book Club had a lively discussion of Restless Ambition, during DAM's exhibit of Women of Abstract Expressionism in 2016.