I have been asked to write my Reflections, probably because I have been a docent for over 40 years! I graduated from the San Francisco Fine Arts Museums Docent training Class of 1979-81. I do tours at both the de Young Museum and the Legion of Honor. When I applied, I was asked by my docent interviewer why I wanted to be a docent. I cheekily replied “to get out of the house.” At age 39, I had a one year old and two older children and was ready to talk about subjects other than homework, feeding schedules and diapers.  I had been a college English teacher and thought talking about Art rather than Literature would be just fine. This has turned out to be one of the best decisions I ever made and I learned to love my computer and the wide, wide web!

Over the past forty years I have seen many changes! When I was in training, there were no computers. We had a “telephone tree” set up to notify docents of important changes to schedules, etc. Our research papers were typed on onion skin paper and we used Wite-Out to cover our errors. Docents were expected to address our audience carrying nothing in their hands. (Today many of us use iPads to provide biographical details or add content.) Docent attire was more formal then. I wore my black patent leather shoes with gold buckles, panty hose, a silk blouse, a vest and pleated black skirt. Today, I am much more casual and comfortable! I stand with my audience to look at a painting rather than standing in front of them “pontificating." Everything is much more relaxed. We encourage our visitors' comments and opinions.

I have served under five very different Museum Directors and have been on the Fine Arts Museums Board of Trustees. I was asked to help raise money from the various museum support groups to help build the new de Young Museum in Golden Gate Park. I also served on the Docent Council Board for over fourteen years in various capacities. I was Docent Council Chair from 1995-97. Over the forty years I have attended seven National  Docent Symposiums. The first was the Natural History Museum in Los Angeles, CA (1995) followed by the Seattle Art Museum, WA (1997), the Phoenix Art Museum, AZ (2007), the Art Gallery of Toronto, Canada ( 2009), the St. Louis Art Museum, MO (2011), the Fine Arts Museums of San Francisco, CA (2013), and most recently the Freer/Sackler Galleries, Smithsonian, Washington, D.C. (2019). I am hoping to attend the Nelson-Atkins Museum of Art Symposium in Kansas City in 2022! 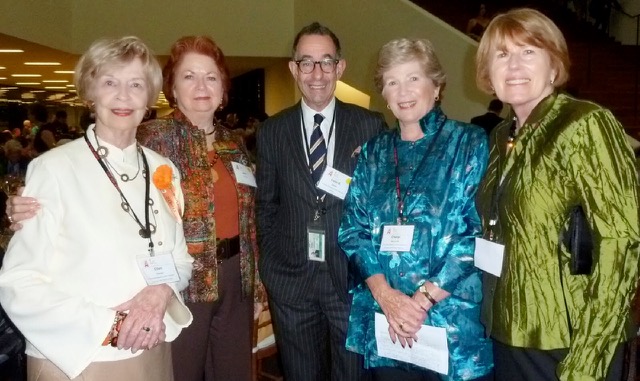 I’ve even been involved in planning a Symposium.  I was asked to Chair the 2013 Symposium in San Francisco and immediately found two Co-Chairs, Mina Shea and Ellen Harden, to take on this monumental task! The trick was to get the other museums in San Francisco to take on some of the responsibility. I learned in my nine years as a Trustee to inspire individuals with food, so we invited  all the Docent Council Chairs of the other Museums to lunch! We wanted total participation from all the San Francisco Art Museums. Our Symposium took six years of planning but I believe it was very successful.

Mina Shea and I are now ready to turn the baton over to our younger docents who are fully qualified to serve on the NDS Committee of our Docent Council Board. The NDS Chair has been  a permanent position on our Docent Council Board since 2013. Docents Nationwide face many new challenges. To remain relevant docents need to be open to new engagement strategies, attract diverse new audiences and be willing to take on Exhibitions that they might find challenging.