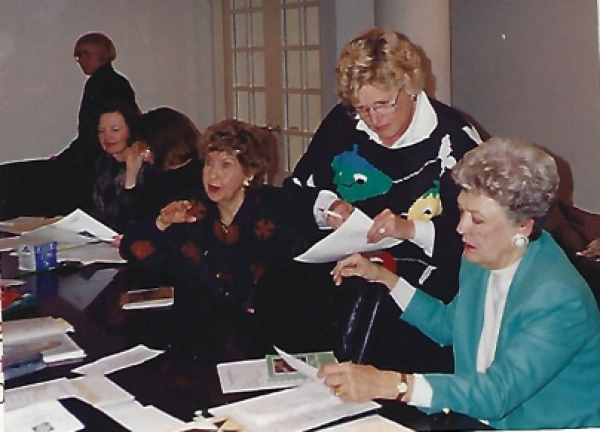 I was one of the planning chairs for the 1993 National Docent Symposium, hosted by the docents of the High Museum in Atlanta, Georgia. Planning took place over 6 years. There are so many details in planning for such an event!

Six docents and two staff members from the High Museum went to the Denver symposium in 1991 to prepare ourselves for our own symposium two years later. We included a beautiful fall Sunday afternoon in the mountains with a train ride before registration and serious business. 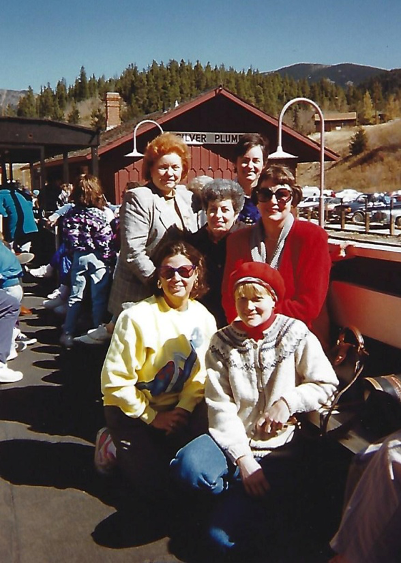 Once the Symposium began, we paid attention to every detail.  I learned an important category of special needs, when keynote speaker Lynn Cheney had a milk carton placed before the podium for her to stand on, explaining she was "vertically disabled."   I was most impressed with the centerpieces, which were changed for every meal in the dining room. They represented the geography of the city of Denver and the season of the year and were very creative, using inexpensive available materials (barbed wire, rocks, native grasses, wood). 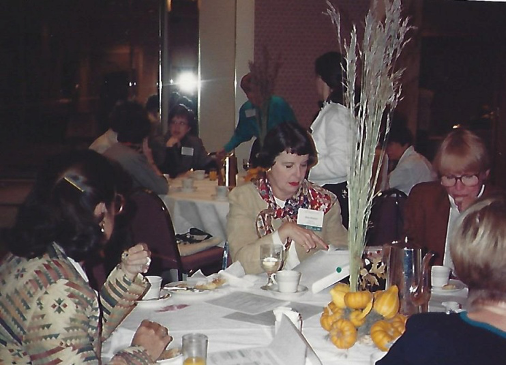 On the final morning of the Denver Symposium, our delegation, dressed in our logo colors of Georgia red clay and beige, mounted the podium on the final morning carrying fans sporting faces of Scarlett O'Hara and Rhett Butler. We issued a very dramatic and humorous invitation to Atlanta 1993, flipping our fans and ending with a plug for our Braves, who were on the way to winning the World Series.

Back in Atlanta, we got ready. We sent invitations by mail and hand delivery. The flyer advertising our Symposium was bordered by the names of other cultural institutions in Atlanta. They helped the High docents in the planning and staffing and participated in the Symposium. Our event would not have been the same without a southern Bar-B-Q at Zoo Atlanta with demonstrations by the elephants and flamingoes. 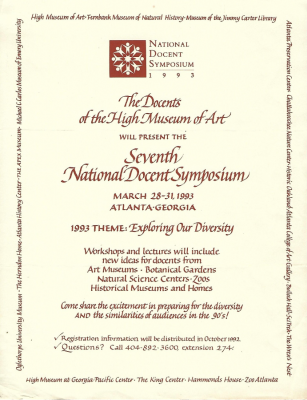 We were very proud of our theme of "Exploring Our Diversity." It was a really hot, cutting edge topic in 1990 when we chose it. The first day of the conference we discovered how needed it was. As we were loading all the delegates onto buses to visit the various cultural institutions in our city, one woman asked the African American man in front of her if he was the bus driver. He was Dr. Rex Ellis of the Smithsonian Institution, who had given the keynote speech that day.

Many of our panelists came long distances and lugged boxes of handouts and demonstration tools. Some even wore costumes to spark interest in their presentations! 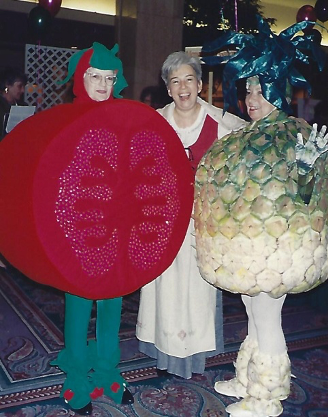 Each of our 96 speakers and panelists received a small green glass classic Cocoa-Cola bottle with a beige rose and a Georgia red clay ribbon tying a thank you note to it. These gifts were all sitting on a cart in the hotel when a visitor stopped and exclaimed "Oh, Atlanta's Waterford Bud Vases. " We got notes from NY City to California thanking us for those treasures.

When the event was over, the members of the Steering Committee realized how much we had bonded in working on this event. We had been meeting monthly for 3 years, and lifelong friendships had been formed. So we kept meeting monthly. Twelve members of the committee began meeting for lunch on the 3rd Wednesday of each month – from 1993 until Covid19 shut us down temporarily in March 2020. We have lost two members, and four have moved from Atlanta, but we’ve welcomed a few new members to our “Atlanta Waterford Society.”

One of our members is looking forward to helping with the NDS 2024, hosted again by the High Museum in Atlanta. We hope to see you there!