As an African American artist, Jordan Casteel’s early experiences in Denver and her awareness around issues of racial equality, influenced her primary choice of subject matter – portraits of African American males. This was further expanded when she began painting people she noticed while walking from her apartment to the Studio Museum in Harlem. Coming from a family that was well known in civil rights circles, Jordan’s paintings ask the viewer to focus on the humanity of these men (and more recently women). The title of the show, “Returning the Gaze,” further conveys her desire for the observer to interact with these individuals and to consider notions of visibility.
For this exhibition, the DAM organized a Community Advisory Committee made up of individuals involved in the arts (including a DAM docent), government, and non-profit agencies. The role of this group was to support the exhibition planning team in shaping a narrative that resonated with local issues and perspectives. They also supported and helped share our programmatic approach and acted as conduits to community partners.

Docents formed study groups to exchange research and touring strategies. Because many of the individuals represented in Jordan’s paintings live in Denver and might be recognized, care was taken to preserve their privacy. This didn’t always work as evidenced by a docent reporting that she heard an 8-year-old boy say, “There’s my barber!” when he came upon the painting of Marcus and Jace. 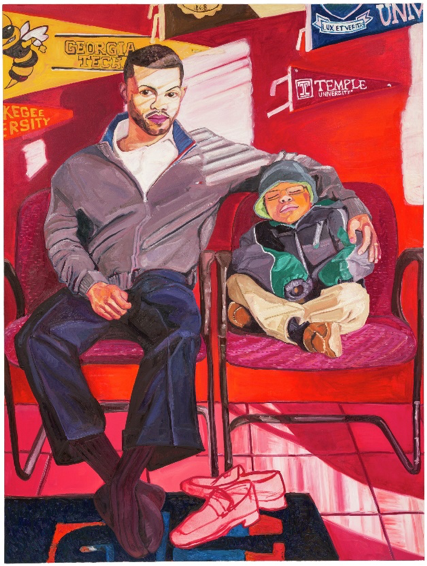 Jordan Casteel, 30 years old, born and raised in Denver, Colorado, received her first solo museum show at the Denver Art Museum. While not studying studio art until her junior year at Agnes Scott College, Jordan rapidly developed her characteristic style which was further honed during her time as a graduate student at the Yale School of Art. This was quickly followed by her first gallery show in New York and a one-year artist-in-residency at the Studio Museum of Harlem.

Jordan has received much notice in the past year. She was profiled in February’s Vogue Magazine, and mentioned in New York Times articles and other publications – both print and online. Her very human portraits fit in with current African-American artists’ emphasis on portraiture. Kehinde Wiley, Amy Sherrald, Barkley L. Hendricks, and Mickalene Thomas, among others, are painting in this genre. 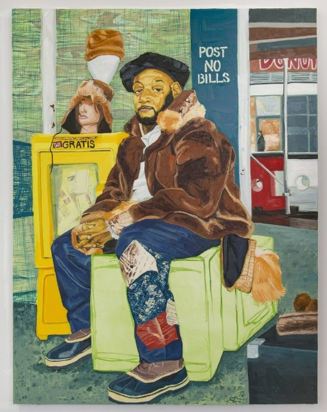 If you are traveling this summer, plan to stop in Denver to see this interesting and provocative show. It continues until August 18, 2019 when it will be moving to the Cantor Arts Center at Stanford University CA.