A Visit to Benin City, Nigeria

In September 2017, I had the wonderful opportunity to travel to Nigeria, West Africa for the dedication ceremony of Chief S.O. Alonge’s photographic exhibition at the National Museum of Benin City.

While in Nigeria and prior to the Benin City ceremony, I had the opportunity to travel around the country. In Lagos, Nigeria’s largest city, I visited the National Museum. At the museum’s entrance is Anyanwu, The Awakening, a bronze sculpture by Ben Enwonwu. The museum contains many pieces of Nigerian art, mostly pieces of older statues and carvings, remarkable for their variety and quality. I saw the Dynasty and Divinity Exhibition featuring “Ife in Ancient Nigeria” as well as Nigeria’s “Arts in Life Cycle”.

The highlight of my time spent in Lagos was my visit to the Nike Art Center and Gallery. The center is owned by the internationally recognized artist and designer Chief Nike Davies-Okundaye and showcases the work of contemporary artists along with various arts and crafts. It was an amazing experience that far exceeded my expectations. Nike is an African woman artist who uses richly detailed and arresting batik images to chronicle her society’s contradictory views towards women. To redress some of the social disadvantages faced by women in Nigeria she established the arts and culture center where an apprenticeship model is used to train aspiring artists. The Nike Art Center has provided training for hundreds of aspiring young performance artists and craftspeople. Master teachers instruct students in wood sculpture, relief carving, painting, bead work, mosaic, batik, the making of adire (dye resistant cloth), applique, pen and ink paintings, quilting, drum making and dancing. There is also a very nice shop to purchase authentic gifts.

Upon my arrival in Benin City, I visited the The Guild of Bronze Casters on Igun Street and had an opportunity to learn more about the amazing lost wax process, including a demonstration by local artists who are the descendants of those skilled craftsmen who cast the renowned ancient bronzes. No other persons outside of these individuals are permitted to cast bronze artworks in Benin City. Igun Street is where you can purchase exquisite bronze works and wood carvings. At the New Benin Market, you can also purchase beads and textiles. 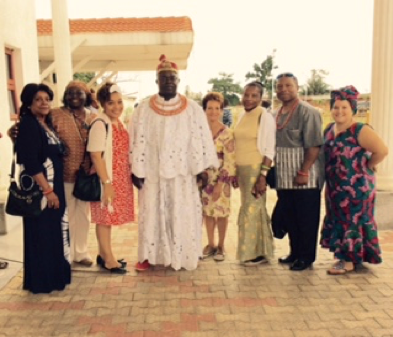 The Oba of Benin City with members of the NMAfA docent corps at the Royall Palace in Benin City, Nigeria.

This special day was devoted to the National Museum of Benin City’s opening ceremony of Chief Solomon Osagie Alonge’s photographic exhibit. There was a full day of festive celebrations with plenty of musical drumming, dancing and speeches. Afterwards, I attended a special dinner sponsored by the Governor of Edo State, (Benin is the capitol city) which featured more exceptional musical entertainment and a sumptuous buffet. Each of us felt blessed to have been a part of such a “once-in-a-lifetime” experience. 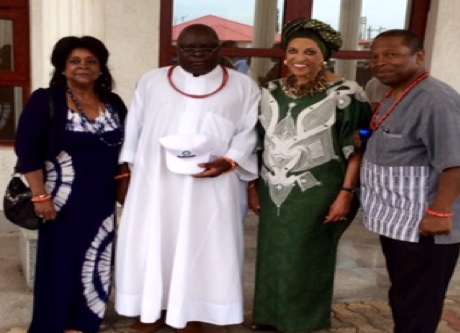 Helen Broadus with Dr. Johnnetta B. Cole, the Oba King and David, a fellow docent.

Following the day of ceremonies, we also took a tour to visit the Royal Palace in Ile Ife. Ile Ife is significant as an ancient town in Yoruba and is regarded as the “cradle of civilization”. According to Yoruba tradition, Ife is the ancestral and spiritual home for all of Yoruba. It is believed that the creation of the world started from Ife, hence it is popularly referred to as the “Land of the Source”. The Ooni is the traditional head of the Yoruba people and is highly regarded amongst the Yoruba and the Nigerian people in general. Kings and gods were often depicted with large heads because the artists believed that the Ase or the inner power and energy of a person was held in the head. 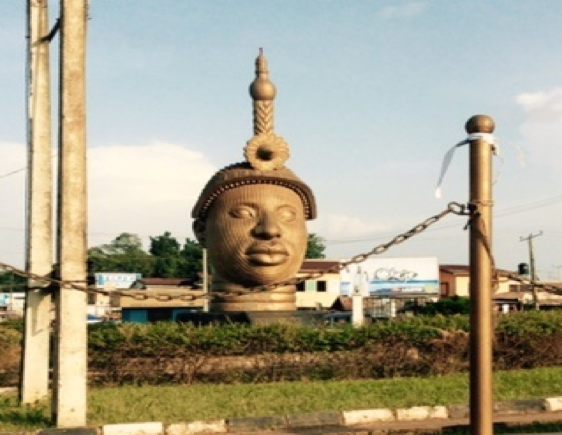 Representation of Oduduwa, the first Ooni of Yoruba culture

We also had the opportunity to travel to the sacred grove of Osun, just outside the city of Oshogbo to visit the sacred ancient shrine of the Mami Wata Princess. This West African deity is represented in a variety of ways; a nurturing mother, a sexy mama, the provider of riches, or the healer of both physical and spiritual ailments.

In the town of Ibadan I also enjoyed shopping excursions to various weaving and textile markets including the Abeokuta Market, which is the largest marketplace featuring indigo textile in West Africa.

Museums serve as an important means of understanding and preserving the cultural heritage of countries like Nigeria. My visit to Nigeria also allowed me to appreciate how museums can play a pivotal role in creating social change.

We had a truly memorable and rewarding visit to Nigeria but I was happy and appreciative to return to my home and docent duties in Washington DC.

Helen C. Broadus has been a docent at the National Museum of African Art in Washington, DC since 2009. She can be contacted at her company http://www.venuetravel.net for more information on travelling in Africa.