It was one of those If it’s Tuesday, it must be Belgium brand of heavily-packed, whirlwind adventures. Here are a few memories of an extraordinary week which was organized by a docent* who provided doting concierge service for our art-hungry pack of veteran docents and friends.

We arrived on a cool Monday morning still groggy at the boutique Ink Hotel in the Red Light District. We headed immediately out on a walking tour of the provocative district alleyways replete with crafted chocolate cafés, caricature condom shops (Comdomerie) and flashes of a few intriguing women inside glass cubicles. We were informed that the neighborhood is undergoing gentrifying, but the women would remain. Later, we savored our first private dinner as a group. We have to get up at what time in the morning?!?

We awoke quite early to a fabulous hotel breakfast and set out on foot to feast our eyes all day on a staggering collection of masterpieces at the Rijksmuseum: Rembrandt’s The Night Watch, Vermeer’s The Milkmaid, and Frans Hals’ The Wedding Portrait of Isaac Massa and Beatrix van der Laen, just to name a few.

After lunch, we meandered along the narrow pedestrian paths and frenetic bikeways, hopelessly lost amid the concentric belt of canals, to reach Rembrandthuis in the fashionable eastern part of the city (where the painter lived between 1639-1659). We broke into two groups to see how the master lived and worked in the home he bought for $13,000 guilders to share with his love, Saskia van Uylenburgh. We learned how he innovated renderings of faces gazing in different directions in his The Anatomy Lesson of Dr. Tulp. We eagerly explored the spare but textural and inviting rooms of his once impressive house and art gallery on the canal. We discovered in-cabinet sleeping accommodations with short beds for slumbering upright. The second floor art studio housed an odd variety of busts and other props for study and we learned more sordid details of his various loves and the debts he struggled to pay until he declared bankruptcy in 1656. Poor guy!

Wednesday we were overcome with a serious case of tulip fever, starting with a guided bus voyage to the Aalsmeer Flower Auction, the largest flower market in the world where buyers compete for stems by stopping the clock at a price point – a system dealers devised. After an educational talk on dike engineering and hydraulics at the Cruquius Steam Pumping Station in Haarlem we drove to the growing fields, where it looked like the tulips were on steroids! We enjoyed a delicious lunch and ended our day at the Disneyland of tulips – the Keukenhof Park featuring every shade of color imaginable in an immaculately groomed park setting.

Thursday was a triple whammy with a sampling of remarkable contemporary art (learning Mondrian is Dutch!) at the Stedelijk Museum led by a remarkable young artist docent. A highlight was the walk-in installation by Edward Kienholz of The Beanery (1965), recreating the legendary cramped and decrepit Los Angeles bar down to fried eggs and cigarettes and 17 patrons with clocks for faces. 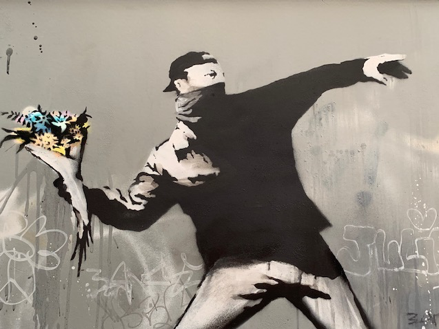 Prior to lunch, many of us ducked into the outrageously irreverent Banksy exhibit at MOCA (Museum of Contemporary Art), a jewel box of a museum located between the Stedelijk and the treasured Van Gogh Museum which we toured after a museum meal.

Friday, we traveled by train to The Hague for a delightful long day. It began with a guided tour of the Mauritshuis and its Rembrandt exhibit, led by an extraordinary American guide from Connecticut. She was so well versed we urged her to come to San Francisco and speak to our docents about Dutch art. This dazzling tour was followed by a walking tour (including the bank that financed the Louisiana Purchase) and a canal cruise which required crouching down, head to knees, while passing under every low-slung bridge along the river.

The next excursion led us to historic hidden houses and farmhouses at the Netherlands Open Air Museum. A historic tram transported our group back in time to the thatched roofs, windmills, spinning wheels and other crafts and traditions before the 19th century industrial age. The gift store there had great souvenirs and candy like salty black licorice to tie us over on the bus to the next stop, the spectacular Kroller-Muller Museum named for the couple who once resided at the grand estate. We loved the outdoor sculpture and the unparalleled Van Gogh landscapes. That evening, several of us headed to a fun and warm Passover service at a Dutch synagogue, where English-speaking locals and visitors congregated for an LGBT-friendly Seder to retell the Exodus story.

Easter Sunday in the city had us in pastel garb exploring another grand estate on the canal which houses the Van Loon Museum, designed in 1671 by famed Dutch architect Adriaan Dortsman and owned by a merchant family of the Dutch Far East Company. Our young guide showed us the toile de jouy bedroom fabrics, family portraits, custom Dutch porcelain dinner service and spectacular coach house and gardens of deep purple lilac.

The final stop was a guided tour of Hermitage Amsterdam, celebrating its tenth anniversary of bringing items from the St. Petersburg collection to Amsterdam. Masterpieces were found in the Portrait Gallery of the Golden Age and in the palm-size, limestone form of the Venus of Kostenki (22,000 BCE.  The female figurine bearing exaggerated attributes of fertility (similar to her Willendorf cousin) is among the oldest known examples of prehistoric sculpture in Russia. We also were shown a questionable Donna Nuda by Leonardo da Vinci, said to have been painted in the 16th century.

The tour finished with a lovely meal. 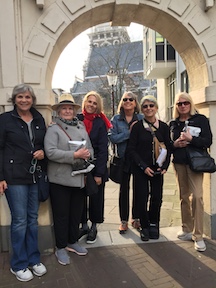 Those of us traveling home gratefully reminisced that no one was run down by a bike, lost for good in an alley or left wondering why the Dutch were brilliant masters of oils and light. We still have goose bumps from the crackled dark and shimmering Golden Age imagery and a profound respect for the learned docents who shepherded us through their galleries.