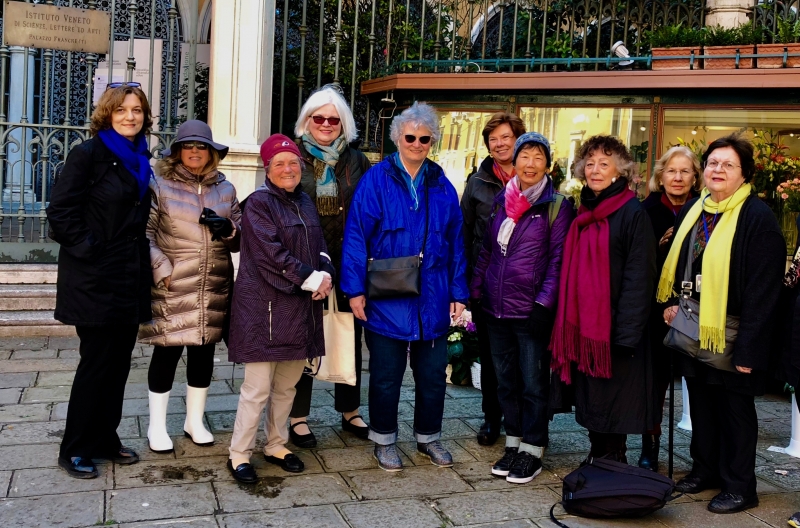 Recently, twelve art enthusiasts, including nine docents from the Walters Art Museum in Baltimore, made a week-long trip to Venice with an art historian and teacher, Dr. Aneta Georgievska-Shine. Dr. Shine is on the faculty of the University of Maryland. The tour was privately arranged: several docents heard Dr. Shine speak about Venetian art and took the initiative to ask her to lead a group tour. One traveler described her as a “Pied Piper of art” as she led us on a “Slow Art” journey. Spending a week in one location allowed us to “go deep,” to concentrate on new restorations and re-installations, and to appreciate special exhibitions and hidden treasures. As another docent described it, “Six and one half days filled with Byzantine and Renaissance art, in the company of caring people, restores, revives and uplifts. Venice is a treasured gift.”

In addition to the required sites such as the Basilica San Marco and the Palazzo Ducale, Dr. Shine took us to see art in situ in numerous churches around the city, including San Zaccaria, Santa Maria de Salute, and Santa Maria Gloriosa dei Frari. Highlights included Titian's stunningly beautiful Madonna of the Pesaro Family in the Frari, the amazing green marble sculpted columns in the I Gesuiti church, and Tintoretto’s glorious frescoes at the Scuola Grande de San Rocco.

Of course there were museums, exhibiting treasures from ancient to contemporary. Besides seeing the masterpieces in the Gallerie dell’Accademia, we visited the Peggy Guggenheim Collection for a modern change of pace. A special exhibition of Marino Marini sculptures at the Guggenheim joined past and present by highlighting how deeply Marini drew on tradition. One docent noted that standing on the terrace at the Guggenheim watching the sunlight dancing on the water of the Grand Canal gave her an amazing feeling of joy and life.

Everyone had their own favorite sights and sounds. Several docents enjoyed the music – a concert of music by Vivaldi (Venice’s “Red Priest”), a performance of La Boheme at La Fenice Opera house, and a gondolier singing the songs he learned from his grandfather. A day trip to the surrounding islands was full of delights: the Basilica di Santa Maria Assunta on the island of Torcello, with its Byzantine mosaics and the gold flecks in the mosaics that make the walls glow; a 9th century Byzantine church on the island of Murano; and the multi-colored pastel houses of Burano. We all enjoyed shopping for lace, scarves and Murano glass jewelry. 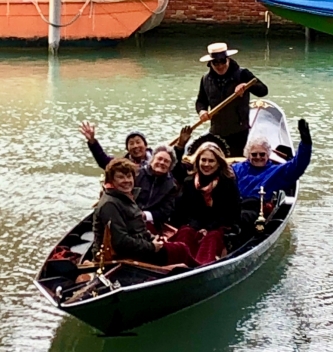 Traveling in late March we avoided the crowds although the weather was on the cool side. Our hotel near the busy Piazza San Marco allowed us to visit the Piazza for quiet evening strolls, church services, and to see the Basilica reflected in the waters of the acqua alta (high tide) filling the Piazza. A tip for travelers: take your rubber boots for the acqua alta or you may have to purchase these knee high pastel plastic booties! 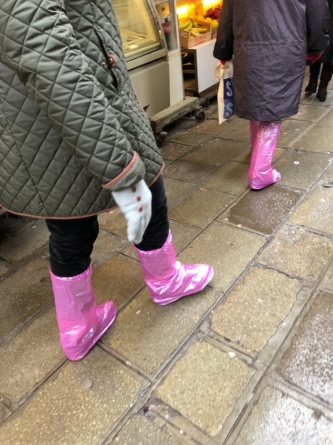