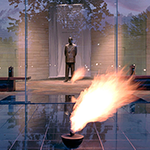 “I never did give anybody hell. I just told the truth and they thought it was hell.” Harry Truman

Unique among American Presidents, Harry Truman took office after Franklin Roosevelt’s sudden death in 1945 and within months had to make decisions that few people in history have had to make.  His popularity was at a low point after he left office, but his death in 1972 brought new attention to his political career.  He emerged as a political folk hero, exemplifying integrity and accountability.

As docents, you will appreciate and enjoy the sweeping Thomas Hart Benton mural “Independence and the Opening of the West,” painted in 1962.  A deep friendship between Truman and Benton arose as a result of the painting of this mural.  Legend has it that as Benton was painting from the high scaffolding, Truman offered his suggestions and critiques from below.  Finally Benton called down, “If you want to help paint, come up here.”  After replying “By golly, I will”, Truman climbed the scaffolding and began brushing blue paint on the sky.  Times like this deepened the friendship between the two men.

Other features of the museum you will enjoy during your visit include:

*Learning how to fire a 75mm field gun before stepping onto the WWI battlefield where Harry Truman served as Captain Truman.

*Seeing the safety plug from the second atomic bomb, then stepping onto the war-torn streets of Berlin and into the Cold War.

*Riding along on Truman’s Whistle Stop Campaign for one of most memorable presidential upsets in American history, then experiencing the Red Scare first hand with an all-new, interactive “Loyalty Oath” exhibit.

*Following Truman's evolution as a champion of equality and learning how Executive Order 9981 paved the way for civil rights legislation by President Lyndon Johnson in the 1960s.

*Stepping inside the Oval Office where President Truman “stopped the buck” and courageously made monumental decisions that continue to shape our nation and our world. “There’s nothing like it in the presidential library system. It is just absolutely stunning.”

(From the Harry S Truman Presidential Library and Museum website)

The Truman Library is consistently ranked among the top tourism destinations in the Kansas City region.  Be sure to put it at the top of your “must see’s” during your visit! 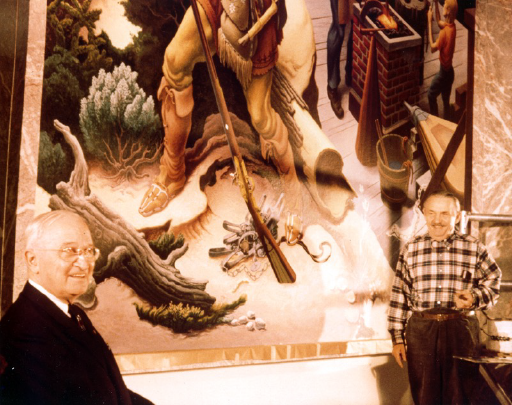 Thomas Hart Benton (right) and former President Harry S. Truman (left) pose in front of the mural painted by Benton in the lobby of the Truman Library, entitled "Independence and the Opening of the West", 1962

More in this category: « History Comes Alive Shopping in Kansas City »
back to top