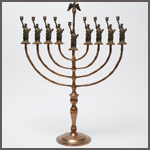 Among the largest and most diverse collections of its kind in the United States, the Michael Klein Judaica Collection spans centuries and continents, while it provides a journey through Jewish history, culture, and traditions.  Browse the collection at Congregation B’nai Jehudah, 12320 Nall Avenue, Overland Park, Kansas.

Many of the Klein Collection pieces bring to mind objects at the Nelson-Atkins.  See these examples.

After exploring the many galleries of the world-famous Chinese collection at the Nelson-Atkins, check out two of the oldest pieces in the Klein Collection.  The two Chinese Tomb Figures date from 600 CE (Tang dynasty).  Because their facial features and clothing are not Chinese, they are believed to represent Jewish merchants who appeared in the Chinese court after arriving via the Silk Road. 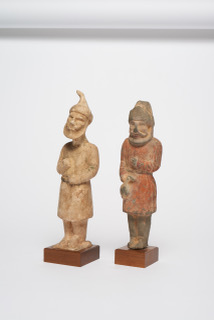 The European galleries on the Plaza Level of the Nelson-Atkins display several works of the Bauhaus artists, with their characteristic clean lines, functionalism, and refined form.

The Bauhaus style is represented in the Klein Collection by Ludwig Wolpert’s pieces.  In addition to the Bauhaus economy of style and clean lines, he was known for introducing Hebrew letters as the dominant artistic element in Jewish ceremonial art.  When you see his silver Sabbath candlesticks, you’ll notice how the Hebrew text is an integral part of his whole design.  These candlesticks were made in America in 1970 by Wolpert.

The Klein Collection also displays a silver Havdalah set by Wolpert, as well as two of his Torah breastplates. 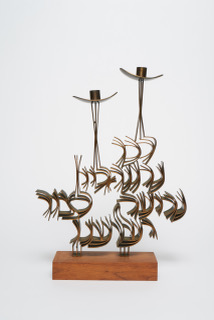 Manfred Anson created his brass Liberty Menorah in 1986 to commemorate the 100th anniversary of the dedication of the Statue of Liberty.  With this piece he drew a connection between European Jews escaping religious persecution in the 1940’s and the Chanukah story of victory over persecution in 165 BCE. 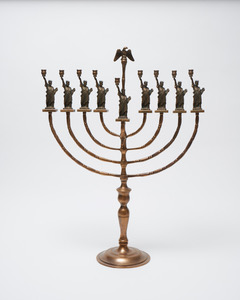 See this exciting Judaica collection at: