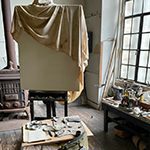 Thomas Hart Benton was born in Neosho, Missouri, on April 15, 1889. He became one of America’s most renowned painter, sculptor, lecturer and writer.

After pursuing art instruction in Chicago and Paris, teaching in New York City, and a brief stint in the navy, Benton moved to Kansas City in 1935.

In 1939, Benton bought a home in Kansas City that was built in 1903. This two and a half story, eclectic style house was constructed of native, quarried limestone. The home contains simple furnishings in neutral tones; a contrast from Benton’s vibrant paintings. After his death in 1975, the state of Missouri purchased the home in 1977 and turned it into a museum. The house has remained virtually untouched and inside it’s like stepping back in time.

Benton converted half of the unattached carriage house into his art studio, which remains as he left it.  Visitors will see coffee cans full of his paint brushes, numerous paints and a stretched canvas waiting to be transformed into another of his masterpieces. Benton died while in his art studio on January 19, 1975.

Benton was a small man, 5 feet 2 inches tall; described as a man with a gray mane of hair and a face the texture of oak bark. He often wore rumpled corduroy and flannel, and walked with an unsteady swagger.

It has been said by those who knew him that Benton was a man indifferent to opinion, indifferent to financial success and heeding no drumbeat but his own. He worked in his studio, played his harmonica at Saturday night sessions with cronies from the Kansas City symphony, floated on his beloved Ozark rivers and skinny dipped with Rita, his wife of 53 years at their summer place at Martha’s Vineyard.

When asked which of his works he liked the best, he replied, “The one I’m working on. It’s always been that way, I guess.”

If you are a fan of Thomas Hart Benton, this docent led tour is you will not want to miss!

More in this category: « Museum of Deaf History, Arts and Culture The National Museum of Toys/Miniatures »
back to top