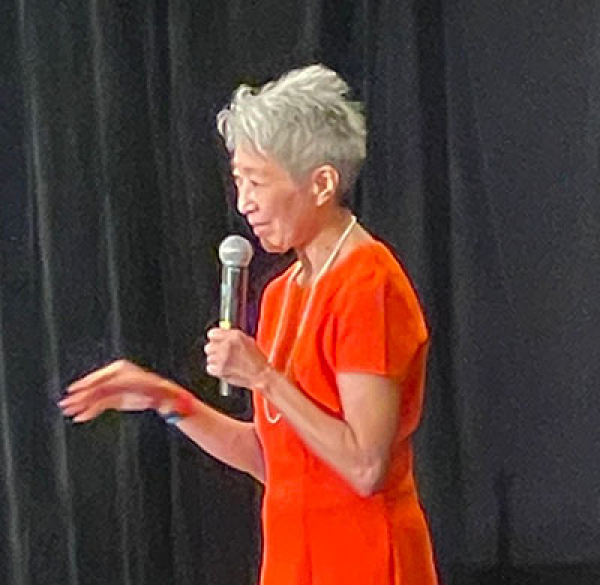 "It's the PERFECT Time"

Jane Chu, keynote speaker at the National Docent Symposium in Kansas City, brought a rich perspective
from her years as the chairperson of the National Endowment for the Arts. She stated that whether you
are a docent, guide, gallery teacher, or educator, there has never been a better time to be involved in
your institution.

Despite the challenges and ambiguity museums have experienced as a result of the
pandemic, Jane shared that now, more than ever, people are yearning for meaning and belonging. The
arts (from visual to performing) are thriving, and docents are finding new and expanded ways to connect
the arts with a diverse public. During her tenure at the NEA, 1600 communities within 580 cultural districts
in the U.S. received funding. The arts touch us all.

Jane emphasized the importance of connection. That how you do something is as significant as what you
do. Connect to people outside of the arts, have conversations that celebrate the distinctiveness of
cultures and styles, embrace the "messy message" as we navigate through the unknown together. Jane
advocates for finding the story...creating special interest stories that attract the media and bring
necessary attention to the work that we do. She referenced András Szántó's 2020 book, The Future of
the Museum: 28 Dialogues, interviews with leading international museum leaders during the pandemic.
As we navigate through ongoing change, Jane concluded, "sometimes we're building the plane as we fly
it" Docents and guides are innovators, serving in a vital role during one of the most important times to be
an educator in several generations.

Jane Chu combines her academic research and professional practice in the arts, philanthropy, and
business administration. In 2014, she was appointed to serve as the eleventh chairperson of the National
Endowment for the Arts, completing her term in June 2018. Chu is also a practicing visual artist, and
a Distinguished Visiting Scholar at the Indiana University Lilly Family School of Philanthropy.
During Chu’s four-year tenure at the National Endowment for the Arts, Chu traveled to 50 US states and
four countries, 200 communities and made more than 400 site visits to meet with artists and arts leaders,
government and civic leaders, philanthropists and the general public. The NEA awarded $430 million over
the four years to support the arts in 16,000 communities covering 50 states, US jurisdictions, and in every
Congressional District. In 2016, the NEA was ranked number one in the Best Places to Work in the
Federal Government for small agencies.

Prior to coming to the National Endowment for the Arts, Chu served as the founding president and CEO
of the Kauffman Center for the Performing Arts, overseeing a $413 million campaign to construct and
open the performing arts center in Downtown Kansas City, Missouri.

Jane Chu straddles multiple cultures, having been born in Shawnee, Oklahoma, and raised
in Arkadelphia, Arkansas, the daughter of Chinese immigrants. She received bachelor’s degrees in piano
performance and music education from Ouachita Baptist University, as well as a master’s degree in piano
pedagogy from Southern Methodist University. Additionally, Chu holds an associate degree in visual arts
from Nebraska Wesleyan University, an MBA from Rockhurst University, a Ph.D. in philanthropic studies
from Indiana University, and five honorary doctorate degrees.