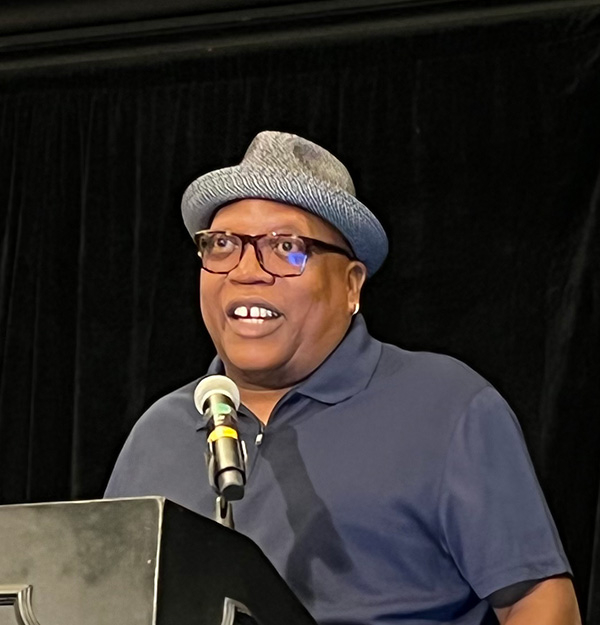 Reflecting on the power of poetry in art

Recently, at the National Docent Symposium, we had the privilege of listening to a talk
given by poet, activist, educator, and Director of Inclusive Learning and Creative Impact at
the Kansas City Museum, Glenn North. Mr. North has a very impressive list of
accomplishments and collaborations and his title alone made me want to be him when I
grow up.  But it was his poetry most of all that moved me and even brought me to tears.

He often writes ekphrastic poetry, or verse written in response to visual art...describing it,
relating to it, and drawing connections from it. The poem Lynch Family Blues (hear it here)
he wrote in response to a painting at the Nelson-Atkins Museum (see it here) that
depicts an anguished young Black woman holding a baby. His ability to climb into that
personal moment while also creating the scene of a lynching that played out so many times
in our country's history, was powerful and devastating. And in the poem that started his talk,
about the traditionally Black area of Kansas City called 18th and Vine, I could feel the jazz
syncopation and it made me tap my feet in response. (To hear that poem, go here, scroll
down to the portion called "Black Tide Rising" and listen towards the end at 48:02).
Art can move us in many different ways and, using different forms of art to help bring out the
highlights and even subtle hues of a particular artwork, can make us see and feel in a way
that perhaps one artform alone isn't capable of doing. I know Docents often use music,
poetry, storytelling, and even acting when they are getting their audience to look at a work
of art more deeply. Docents are creative people and we love to explore the creative process
inherent in all the works we present, and if we can also explore other artforms while we do
that, all the better. I say celebrate the arts, and let them play off each other...through using many angles, we
may just find ourselves "seeing" more clearly!